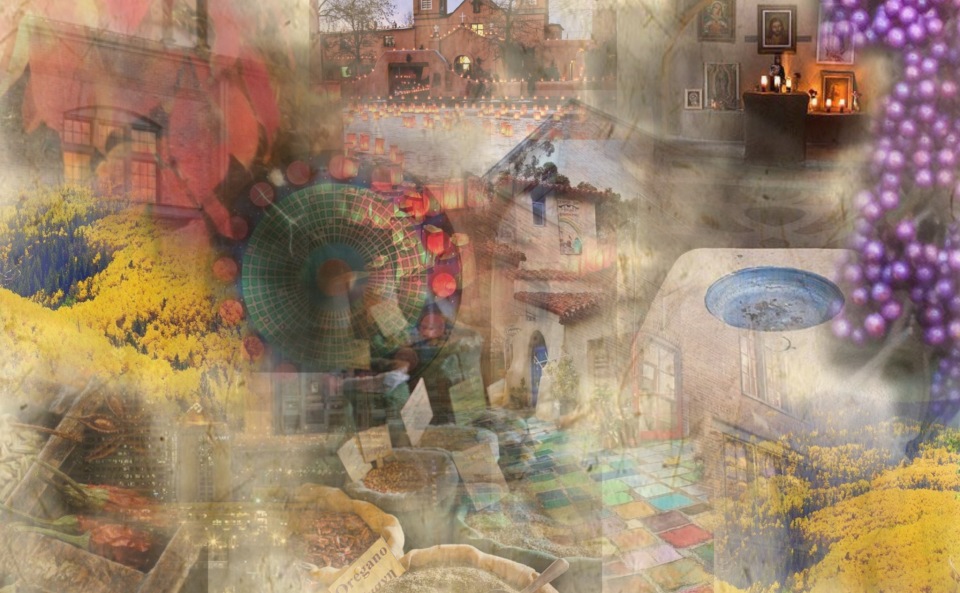 Salvador felt the world reeling around him, as if it was about to disintegrate and transform into something radically new.

It was a capacity he had developed years ago, shortly after beginning serious meditative practice. Most often his meditation yielded modest results: greater mindfulness and deeper insight into what everyday life seemed to be teaching him. But from time to time, especially when he had been meditating consistently and with deep concentration, he would have disturbing dreams in which he seemed to be living another life in another world –a life and a world in which, even more so that in this one, things were falling apart. He would awaken in a panic. Not infrequently there would soon be disturbing events in the news.

Mostly he had learned just to live through it, using the mindfulness he had carefully cultivated over the years to refocus him on the big picture –the long march through endless lives, the fascinating journey through countless worlds, doing what he could to ripen Being along the way. The grand transformations, that terrifying sense that the world was decomposing and recomposing all around him, and himself with it: these were all part of the process, a result of seeing things as they actually are. Someday he would come to regard them as no more significant than a passing sensation of hunger or thirst.

But old karma dies hard. He struggled to respond to the tension with meditation and mindfulness, and by plunging himself like a karma yogi into the work of teaching and organizing and, increasingly, of pastoral care –this strange work into which he had fallen as into a karmic well. And by most accounts he had done well. Dean for five years at Nizhoni College, he had doubled the number of students completing their classes (albeit only to a still miserable 32%) and introduced new programs in sustainable energy, water conservation, and ecocultural tourism while making the college into something of a sanctuary, however small and remote, for the liberal arts. Many of his old adversaries had become allies and he had a significant following among the diverse seekers which Nizhoni attracted. He had just stepped down to return to teaching and writing –and, perhaps, to find the life partner who had always eluded him.

Sometimes, though, when the tension was especially strong, he needed to withdraw for a while and just wander: to head off into the wilderness or on one of his strange urban pilgrimages into shabby warehouse districts or strips of suspicious looking “bakeries” and “import/export” businesses backing up against old train yards.

This time, as usual, the tension was accompanied by both troubling news and odd developments in his personal life. Doing a final check of his email as he was getting ready to head out on his annual autumn pilgrimage to Chimayo and Truchas, he noticed a news flash about an explosion of some kind at a government laboratory, part of Los Alamos National Laboratory, but located to the West, somewhere near San Mateo, north of Grants. He made of note of it and planned to look into it as soon as he got to Albuquerque, but when he did he could no longer find any reference to it anywhere on the Web. And then there was the case of his missing library book. For months he had been renewing the copy of Umberto Eco’s The Search for a Perfect Language, which he had taken out of the UNM library, hoping that it would turn up somewhere in the junk heap he called a car, where he had put it the last time he headed for the mountains, three semesters ago. But his renewals had run out and now he had to face the music. So he contacted the circulation desk and asked how to pay the replacement fee.

–Replacement fee for what? the clerk had said. We show you with no current books checked out at all, much less any that are overdue or lost.

When he checked his account for himself, he got the same result. Then he looked for the book in the catalog, and it was no longer there. Nor was it available for order on Amazon. In fact there was no evidence it had ever been written.

It was thus that he found himself on a chilly October day, under gathering clouds, wandering among a group of old industrial and commercial buildings off Mountain Road in Albuquerque, Northeast of the Plaza Vieja and just west of the old railroad yard. His mind jumped from one dark image to another as he searched among the machine shops and wholesale merchants for something of interest. He never knew just what he was looking for, but he always found it. Another addition to his collection of odd memories, signs, he told himself, that the world really was the scene of great theopolitical contests, taking place “in with and under” the activities of daily life.

The catalog of these memories was endless: an para-Masonic lodge in Pilsen, in Chicago, across from Pius V, bearing the same name as another he found in the old Mercado central in Juarez: La Sociedad de Los Hermanos Illuminados de la Estrella Roja, the “Universal” Bakery on Interurban in Richardson which turned out to baking something other than bread (he still didn’t know what, but there seemed to be a Yemeni Connection), or that old laundry (!) in Chinatown in San Francisco which had returned his clothes packed in annotated copies of Zhou Dunyi’s Explanation of the Diagram of the Great Ultimate, written in what a friend told him was an obscure Yunnan dialect. There was, it seems, something about these “liminal districts” as Salvador called them, located at the edge of the ordinary, which brought together the sacred and the outlawed.

Salvador was not surprised, therefore, when he noticed up ahead of him, just beyond the Martinez Metalworks, a sign for the Boszormeny Bakery.   The name, he thought to himself, is vaguely familiar –a Magyar word, but remembered from his research on the Ismaili movement.

This place, it seemed, actually did bake bread and Salvador was hungry, so he followed his nose and entered the place. There were a few cases with what looked like fresh loaves of rye bread, confirming the Hungarian connection. But there was also some fresh pita. Beyond this there were a few shelves of spices, including packages of hawaij, a Yemeni spice mixture. And there was a deli case selling sable bellies and smoked tongue. Salvador felt like he had walked into some kind of Rahu induced culinary fantasy. He would stock up here for his trip north.

The unusual and fresh displays of bread, spices, meat, and fish nothwithstanding, however, this was not an ordinary commercial space. Most of the shelves were empty. One held an eclectic assortment of religious tracts –everything from the glossy New Kadampa Movement catalogues that were now omnipresent in Albuquerque to several which bore what looked like a Druze star. There was also, interestingly enough, a copy of the Shas journal Day to Day. There were aging computers scattered here and there, including several which looked like they were still running DOS. And when Salvador peered behind the counter, into the workroom in the back, he saw that the kitchen, while still functioning, had been retrofitted as an office, with several laptops running what looked like MMORPGs and MMORTSGs.

Salvador brought his merchandise to the counter, acting as much as possible as if he was an ordinary customer (Who were this place’s ordinary customers? Did it have any?). Suddenly, as if from nowhere, a black haired woman in her early twenties appeared: possibly a Persian or a Central Asian Turk with some Sogdian ancestry, but more likely a Sephardic or Mizrahi Jew.

Salvador knew the drill from this point on. She would ask briskly what he wanted, obviously surprised to have a customer at all. He would point to his merchandise. She would process the transaction, suspiciously. Then he would leave. Sometimes he would be followed for a while. Once or twice he had been mugged within an hour after such an encounter, with only his ID stolen. And once he had been stopped by some “police” who had asked to see a driver’s license, and then apologized, saying that they had made a mistake, but only after carefully copying down his name and address. It was all part of the game. It confirmed to him that what he was uncovering was real, even if he was not in a position, at least at this point, to ascertain what it was.

This time, however, it was different. The young woman was cordial, even flirtatious.

–What brings you to this part of town? she asked him. She had a thick Israeli accent.

–I was visiting the Cappilla in the Plaza Vieja and decided to take a walk. My nose brought me here.

–Who are your regular customers? he asked rather boldly.

–My name is Gevurah, the young woman said extending her hand.

–Salvador, he said, reciprocated reluctantly. Then, recovering his composure he added:

–I hope that your judgment is not too harsh!

Then, not knowing what to do next, Salvador gathered up his merchandise, and turned to leave. Much to his surprise, she came around the counter to open the door for him. In the process she touched him lightly on the shoulder and smiled again, saying:

–Thanks, he said. I will

He was no more than half a block away when an old woman emerged from an alley and handed him a piece of paper. La Capilla. 2200. Be there. Then she vanished. He reached for his wallet to secure the paper there.